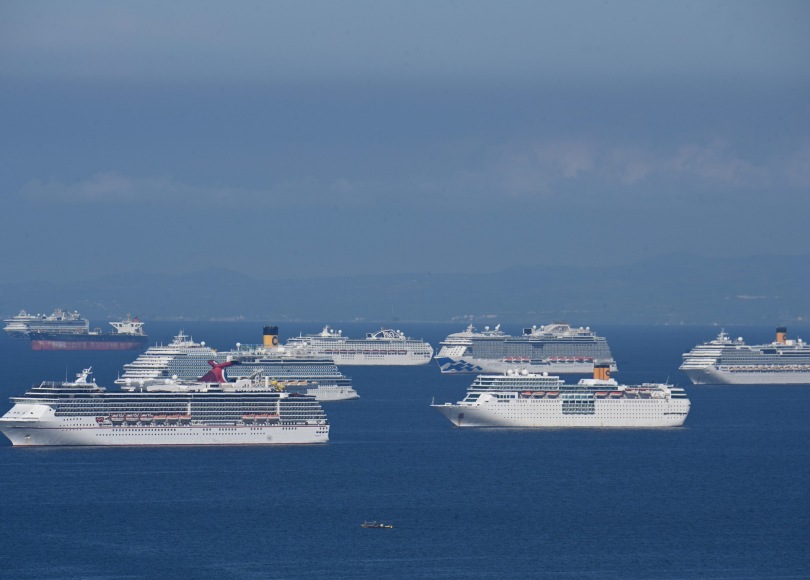 Ever since the spread of the Corona Virus which was named Covid 19, the Cruise sector is probably one of the hardest hit industries in the world. Of course this industry is part of the larger Travel industry. However, many of the airlines and vacation destinations are about to slowly open up again. Meanwhile more or less all cruise ships (except a few) are still laid-up at anchor somewhere around the globe. We saw the virus slowly spreading in the beginning, by the traditional ways, such as travel. This is always the main path of any virus. So the Travel and Leisure industry started to react……slowly, as well as the countries which got the virus. Suddenly people became aware of the fact that large masses were transported from A to B and further on to C on cruise ships. Nevermind the sum of regular flights, where even more people go transported (and even faster).

Things started to speed up, fast. Soon the Media was spreading their Doomsday theories, while experts everywhere came out of the woodwork telling us whatever they needed to tell us. It is just a Flu, it is a killer Flu, it is just a regular virus, it is a killer virus. It is man-made by (insert country here), or a dangerous mutation which the nature itself has made in order to wipe out the human specie. One would think the media hype would slow down after a while, but nope, it took off, and is still working full power creating articles and reporting from government agencies and quoting government representatives and experts. And when these things happens in the world, the focus will normally be at two things, what to do and who to blame. The most important for the media is of course who to blame, that sells more.

Ahhh, the Cruise ships! A perfect target, since most of us are already familiar with this fast growing sector in the travel industry. As always the media jump on the bandwagon, whichever can help them sell more. And what sells more than stuff that can feed a lynch mob? Suddenly we started to get reports about the spread of the virus on the ships. One cruise ship after another reported cases, with the result that ports reacted with what we call a “knee jerk” reaction. They started to deny all the “apparently” disease ridden floating coffins access to their ports. It was like the ships suddenly were filled to maximum capacity with “Walking Dead” who were just waiting to create havoc in every port. NO dialogue needed with ships or their owners. They must be stopped, at any cost, before they kill us all!

As a seafarer, this reaction is well known by many ports in the world. Whenever a Harbour Master (or harbour authorities) is faced with a decision he/she must make, and doesn’t know the facts, closing the port seems to be the number one choice. No matter what is it, they ALWAYS say no! You can ask the port if you can lower a lifeboat for some maintenance, and they say no. You can ask to do something they do not know what is, and they react as it is dangerous. ALWAYS the same reaction. The majority of Harbour masters around the globe has no maritime background at all, or as a minimum maybe worked on a local ferry for a year or two. Many get their jobs via the bureaucracy because they are in the political system, or via regular corruption as paying for the position or a family member helps out. Nothing new here.

The comments section everywhere started to flow over with people writing about these ships, and how terrible they are. Especially people whom to begin with hated cruise ships, or had a bad experience on one started to express their feelings. The Torches and Pitchforks were brought out, crucify crucify! And suddenly the phrase “Petri Dish” became known by most people. A new word people liked to show off with, without really understanding what it meant. Most just used it to express their opinion that there are so much viruses and bacteria on these ships, no wonder people get sick onboard. It really took off. One would think you would become doomed if you ever stepped onboard a cruise ship. At least you should expect become infected with something really nasty.

Of course, for us who work in this industry, we take great offence here. Reason is simply because we know what is going on onboard. We know the routines and procedures onboard, as well as all the protocols in place in case of an outbreak. Most people are not aware of the fact that there are so many hygiene routines in place on the cruise ships. The newly discovered hand sanitizers people talk about, have been in place on all cruise ships for decades already. Decades folks! Sanitizing all surfaces with strong chlorinated solutions have been part of the routines since before I started out (in the 90s) in the industry. Fogging public areas to kill viruses at night, has been implemented a long time ago. All cruise ships are equipped with Hospitals where licenced MDs and Nurses work. Just as it is back home in your local hospital. The ship’s even have Morgues onboard. Again, same as back home. Hardly any difference between a cruise ship and a typical tourist destination where the hotels and beaches are located. The difference in the pictures below? There is none!

Or, tell me the difference between the parties on a ship and regular bar ashore, as we see below? There are none! Still, it seems like people have made up their mind.

You probably didn’t know this, your odds of getting sick at all on your cruise are just one in 14,000. This is ridiculously good odds actually, when one think about how close to each other all these people can be at times. What do you think it is in your own town? People get sick all the time, right? Going a few months back and looking at the numbers, did you know that only 0.07% of Coronavirus Cases were Linked to Cruise Ships? Probably not, because that is not good news for the hype the media feed on.

The companies really struggled to be able to send their passengers home by the end of the cruises. This due to the panic which struck all over the maritime and travel related world. Ref the Knee jerk reaction in the various ports. Some ships sailed without destinations with passengers onboard, for weeks and even months. Just like taken out from a movie. Nobody wanted to know about how these people suffered, being isolated in their tiny cabins, day after day, week after week. Nobody wanted to know about the economic impact this also had to many of the passengers, who had to be back making money for their families. Not to forget the mental impact. Instead their were stuck onboard, like some sort of lepers 100 years ago. Finally, after a while, some ports finally took to their senses and came up with a solution/system.

By then, the virus had become a real pandemic and most countries in the world now had to deal with the spread locally, regardless of travel. The focus was shifted to the domestic theatre, where the scare scenarios started to develop, by the help of Media, sprinkled with some focus of what the authorities did to help. This focus shifted back and forth now, depending upon what the situation was in the various countries. And the just like that, the cruise industry together with rest of the maritime industry was totally forgotten. And so were the crew members still onboard the ships, around the globe. People suddenly became occupied with the fact the virus was now in their neighbourhoods. So…….. screw the people at sea.

By mid-July there were a quarter of a million seafarers stuck on a ship somewhere around the globe. Crew working on all kinds of ships, not only cruise ships. Crew who had no idea when or where they could go home to their families, after finishing their contracts onboard. Finally articles started to pop up and spread in the media, telling the world about these souls. But still people would not accept the fact this was an important issue. Many comments talked about they had a job with food and stuff, so they should not complain. Well, the fact is not that simple, as most got their salaries reduced to a minimum. many of the seafarers stuck could not make it home to the birth of their kids, or even worse, the burials of the deceased dear ones! Some of them had now been stuck onboard for 13-14 months, in decreasingly difficult situations.

Finally, after more and more articles were spread around social sites and in the mainstream media, as well as pressure from the IMO some ports started to open up for crew to be able to fly home, as well as receiving crew from back home, who desperately needed to get onboard again to make money. Still, in the end of July there were 200 000 seafarers stuck on various ships around the globe. It would take some time before all these crew were changed. At least things finally have started to happen. Get the boys and girls home!

Unfortunately, as with rest of the world, many would also lose their jobs in this industry. We saw how bigger and smaller businesses closed down, many for good, with unemployment sky rocketing everywhere. The Cruise industry was of course not saved for this. If the ships do not sail, they make no money. In fact they lose a lot of money doing nothing, because operating a ship is costly regardless if it sails or not. So many ships got sold off cheaply, and/or sent to be scrapped and recirculated somewhere. Thus thousands upon thousands lost their jobs. As did I.

By the way, did you know that everything you see around you in the society or at home, 80% of that have been sent by a ship? Imagine if the ships stopped, and you remove 4 out of 5 items in your life! Ending with a very good summary I read from the page Wikipedia which actually covers what I wrote about here very well. I understand Wikipedia not always have the facts. But the article is very good.

Hopefully you like to make some comments? I will surely appreciate that.

More fresh can the dinner not be.
The past......Another time...another job.
Feed me, Seymour
I found it.