The shipping industry’s climate impact is large and growing, but a team in Costa Rica is making way for a clean shipping revolution with a cargo ship made of wood.I

In a small, rustic shipyard on the Pacific coast of Costa Rica, a small team is building what they say will be the world’s largest ocean-going clean cargo ship.

Ceiba is the first vessel built by Sailcargo, a company trying to prove that zero-carbon shipping is possible, and commercially viable. Made largely of timber, Ceiba combines both very old and very new technology: sailing masts stand alongside solar panels, a uniquely designed electric engine and batteries. Once on the water, she will be capable of crossing oceans entirely without the use of fossil fuels.

“The thing that sets Ceiba apart is the fact that she’ll have one of the largest marine electric engines of her kind in the world,” Danielle Doggett, managing director and cofounder of Sailcargo, tells me as we shelter from the hot sun below her treehouse office at the shipyard. The system also has the means to capture energy from underwater propellers as well as solar power, so electricity will be available for the engine when needed. “Really, the only restrictions on how long she can stay at sea is water and food on board for the crew.”

Right now, Ceiba looks somewhat like the ribcage of a gigantic whale. When I visit the shipyard in late October 2020, armed with the usual facemask, alcohol gel and social distancing practices, construction has been going on for nearly two years. The team is installing Ceiba’s first stern half frame – a complicated manoeuvre to complete without the use of cranes or other equipment. Despite some hold-ups due to the global pandemic, the team hopes to get her on the water by the end of 2021 and operating by 2022, when she will begin transporting cargo between Costa Rica and Canada. 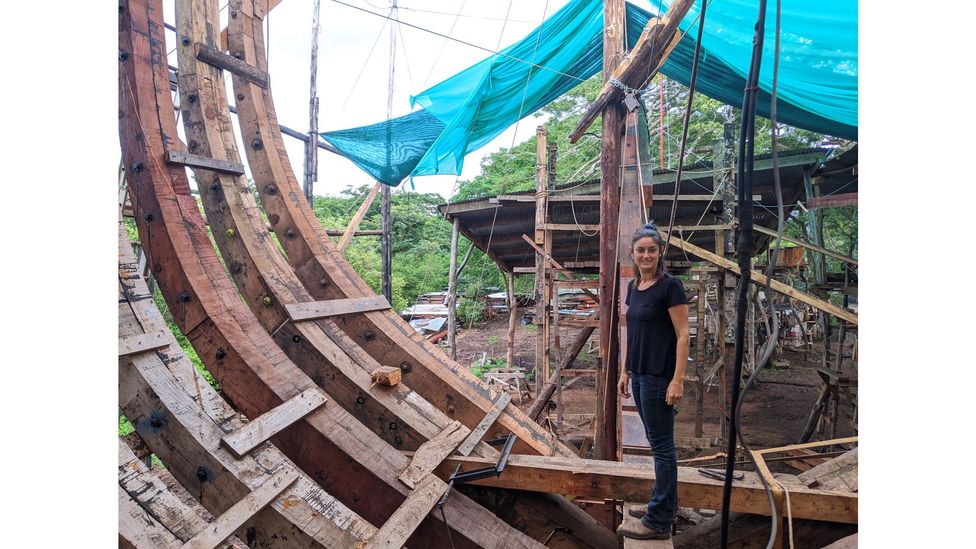 With the hull and sail design based on a trading schooner built in the Åland Islands, Finland, in 1906, from the horizon Ceiba will have the appearance of a classic turn-of-the-century vessel, when the last commercial sail-powered ships were made. “They represented the peak of working sail technology, before fossil fuel came in and cut them off at the ankles,” says Doggett. Sailcargo also plans to explore the use of more modern sail technology, she adds, such as that used in yachts, in its future boats.

For her builders, one of the ship’s main attractions is to provide a much-needed burst of (clean) energy in an industry long dragging its heels on climate. The global shipping sector emitted just over a billion tonnes of greenhouse gases in 2018, equivalent to around 3% of global emissions – a level that exceeds the climate impact of Germany’s entire economy.

In 2018, countries at the UN shipping body the International Maritime Organization (IMO) agreed on a goal to halve emissions in the sector by 2050, compared with 2008 levels. Climate advocates welcomed this as a step forward, even if the goal was not as ambitious as needed to align with the Paris Agreement target of limiting temperature rise to “well below 2C”, let alone the efforts to limit it to 1.5C. But despite the climate goal and some efficiency gains over the past decades, the sector continues to be slow to implement concrete, short-term measures to cut emissions. A major study found shipping emissions rose by 10% between 2012 and 2018, and projected that they could rise up to 50% further still by 2050 as more and more things are shipped around the world. Most recently, the…..

more from the source.