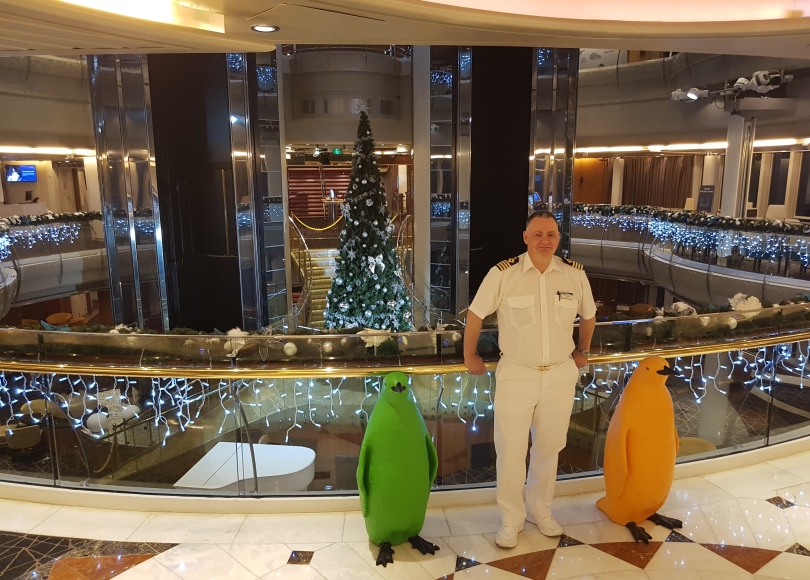 To spend Christmas and New year onboard a ship as a crew member, is a very special time. This is something which only must be experienced to fully understand, because it is really something different. I will try to explain this feeling many crew members have during the holidays onboard, and post some pics from the years I spent onboard, so far away from the family and friends.

The preparations for Christmas and New Year starts as early onboard a cruise ship as it does shore side. One big difference is the fact that absolutely no decorations are displayed onboard until a week or two before the cruise really starts. So everything is planned and made ready for the so called Christmas & New year cruise.
Normally a contracting company come onboard (depending of the cruise ship) to assist with all the decorations. They already have a plan in mind and bring with them most of the stuff. The crew will be ordered to help out with the decoration, depending upon which department (job type) they belong to. This madness happens during a so called “turn around day”, which is when we change passengers, resupply the ship, etc. A crazy long day for the entire crew.

So Christmas and New Year basically arrives as a lightning from clear sky, for the entire crew. We go from regular routine work, to the holiday season over night. Not exactly like we see in the society these days, where the merchants start as early as possible (after the summer holiday), in order to fork in as much as they can.
And after the few weeks with the special holiday cruising, it is sometimes no wonder the crew often call these cruises…«the cruises from hell». It is if not physically, a very mentally stressful period for the entire crew, no matter position onboard.

The Pax (passengers) who are onboard during the Christmas and New year cruises, have a much higher expectation than they normally would have during a “regular” cruise.
This again put an extra burden on the shoulders of the crew members, who work up to 14 hours a day sometimes (Max legal average is 13 hours a day, 7 days a week). The crew must perform over 100% this cruise. In other words, the must up their already high level of service. This is exhausting.
Thankfully the vast majority of the Passengers are regular people who just want to have a nice vacation. And the extremely picky ones, and the ones who look for issues and compensations, are very few. Because the latter (small) group of passengers take a big portion of the attention away from the other regular Passengers, who just want to enjoy the holiday on a ship.

In the middle of this very hectic and stressful period for the crew, the Company will normally try to give the crew a little extra, in form of plenty of delicious food and some Christmas gifts as well.
The crew them self will also chip in by using money from the Crew welfare fund, which is money collected from crew sales, crew raffle, Bingo for Crew, and donations (by pax and company).
This will also help funding a party for the crew on Christmas Eve and New Years Eve.
But as already mentioned, we all work extra these days, so we have to celebrate, and eat our Christmas dinner in shifts. As well as the partying, which is done in shifts.

A special time for the crew to be together, because most of us have our thoughts start wandering towards where we are from and our homes, family and friends.

For many of the crew members, and especially for the crew who has their first holiday away from their home, will feel that they miss their family enormously, and one get this sense of  extreme loneliness. I think 99% of all Officers and Crew members have experienced that special lonely feeling at least once during this time onboard.
So it is very important the crew has a social environment onboard, so we avoid any crew member sitting alone in a cabin missing their family back home. Very easy to start feeling sorry for oneself. Oh yess, I have been there myself.
So the fellow crew members become some sort of relatives to each other. After all, we are in the same boat (silly, I know).

Slide show above: Pictures from some years ago (early 90s). Christmas Dinner for all Crew and Officers.

One weird thing about having Christmas onboard, for us “northerners”, is the fact the ship is often in the warmer areas of the world with baking sun, beaches, and palm trees as the Christmas theme. Something one can see on some of the pics I attached here.
And as a tradition, the various Departments onboard will create their own Christmas cards, which they will share with the other departments onboard, and also send to other ships in the fleet.
In addition, the ship will normally also make one official Crew picture to send out to all the other ships in the fleet, the company offices, ship agents, and other people or companies we cooperate with.

As one can see from the selection of departmental Christmas pictures below, creativity is often used to make the cards a bit more fun and not always the line up pictures.

So, when Christmas and New year has passed, and the cruise is finished. Everything is back to standard routines again, as fast as the Christmas and New Year cruise started. The same company come onboard during a Turn Around day, and take down the decorations. And just like that, it is all over.
Then we all hope the rotation will be so we can celebrate the special holiday back home next year. But it doesn’t always work like that. Some are lucky and some are not. Depending upon transfers to other ships, promotion of rank, colleagues getting sick (or sacked), etc. So one might find oneself once again onboard during this holiday.

Myself, I have out of 30 years, been away from my family 20+ times during Christmas and New Year.
You get used to it.

So, the time away will make one feel a bit lonely, together with other. But still, the Christmas and New Year is just a fraction of the time one spend onboard anyway.

Seasons Greetings to all you Seafarers out there.