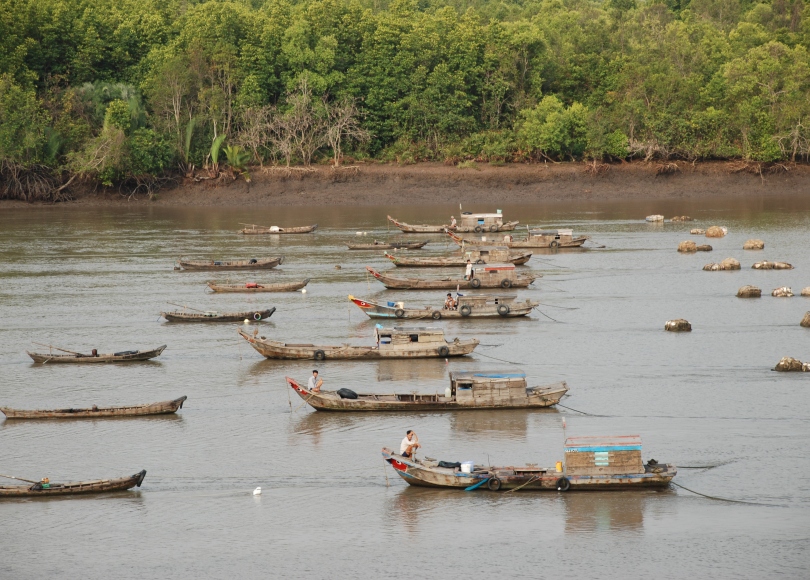 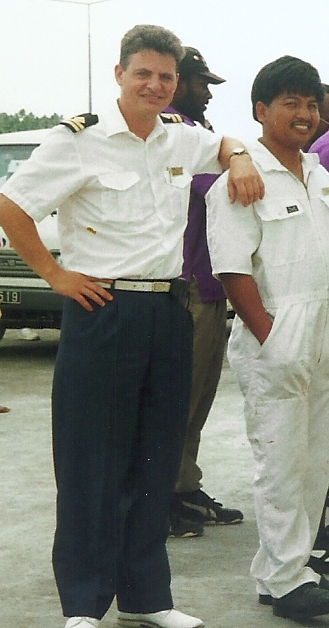 A fresh 2nd Mate, together with a Deckhand (later Bosun).

I had just visited Thailand for the first time in my life, and what an experience that had been. Amazingly enough, it was more or less what I expected, the good and the bad included. Having read a lot about Thailand before we got there, since I have always been a History & Geography Buff.  But still, so many new impressions to take in, and to digest.
And now, we were sailing towards Vietnam. Another famous country, for her beauty, mixed cultures, and not to forget a very troubled passed. And this time I was not the only one who was extremely excited about our destination. Because the vast majority of our passengers were actually Americans back then, and some of them were a little but worried about how they would be treated by the locals. Something which turned out to be absolutely nothing to worry about. A wonderful people who seems to always look ahead, and never think too much about the past. Something to learn here.

Entering the Delta with swamps, rainforest, and a river which twists and turns.

We picked up the Vietnamese Pilot just before we entered in to the Saigon River, a few miles south west of the city Wung Tau, which is normally the port where the bigger cruise ships will berth (stay alongside). And again, just as with Bangkok river, since our ship was relatively small (only 134 meters long) we could transit up the river to almost downtown Saigon, or Ho Chi Minh City, which is the Official name. Although, we learned later that the locals still call the city Saigon.
And to my big surprise, the Pilot was not alone. He was escorted by a military police. Something I had to be explained, it was because the authorities wanted to prevent the Pilot to engage in either political talks with us, or trying to defect (claim political asylum), since we were a foreign flagged ship. To me, it was welcome to the real world outside “safe and sound” Northern Europe.

The river twists and turns all the way up to Saigon.

I thought I have seen it all (in my naivete) after a couple of hours of Bangkok river, with all the traffic there. But nothing had prepared me for the madness we were about to experience the next 3-4 hours up to Saigon. Insanity comes to mind when I experienced this the first time. The traffic was absolutely immense, with everybody doing whatever they felt was the safest way. So our Pilot was for the next 4 hours using the ships whistle (Horn/Tyfon) and VHF radio to communicate with whichever ship we met. It was unreal to observe for the first time. I could only imagine the stress level the Captain must have felt these hours.

We started to see some modest traffic at first.

This river is very special when it comes to the special “traffic system” they use, and the various types of ships and boats you meet when transiting up or down. Not to forget the interesting fact that so many live their whole life on some of the boats we passed. So I will use most of the space in rest of this Blog Post for pictures (less text).

An interesting sight ahead of us. What could this be? 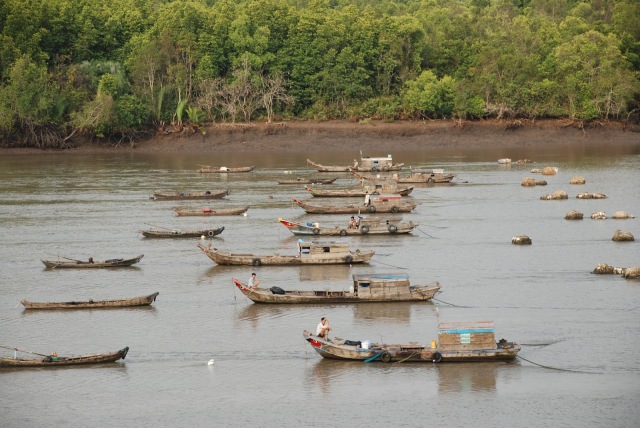 They are tied up to some sort of mooring buoys, and swing with the river’s tide. Sun is up now.

Wonder what he is thinking when this (our ship) gorgeous white cruise ship passes.

We passed jungle, rainforests, a house here and there, and suddenly a couple of small villages which seem to have been established in the middle of nowhere. We passed smaller industry areas, which had been established after clearing the forest. Plenty of small and bigger work boats, which you could see the entire families working on them. 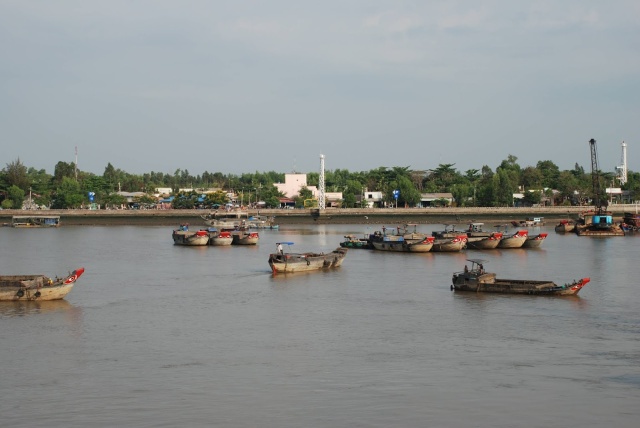 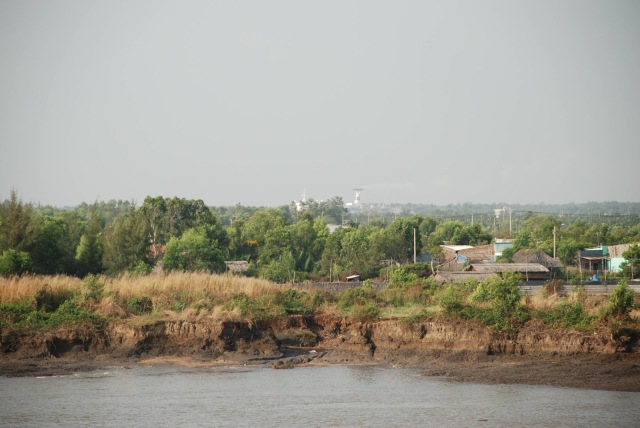 Do you spot the other ship towering over the forest?
It was interesting to see how all the ships and boats interacted with each other, in some sort of strange understanding. This of course is also why we need a local maritime Pilot onboard. Not only because it is compulsory (as in most countries), but he would know the river’s twist and turns, what traffic to expect when, the currents setting the ship sideways, and of course the various river banks (depths).

Look at that erosion caused by the river.


Naturally, as with most rivers leading to a city, the traffic will intensify as you come closer. This made the Pilot use the ship’s whistle and VHF radio more and more. With the Captain clearly monitoring the Pilot’s actions and when the pilot gave the orders to the helmsman. Because all ship will use a helmsman when sailing up these rivers, despite the ship being equipped with an Autopilot.

Better stay clear of this operation.

Imagine work and live here your entire life.
As already mentioned, the river twists and turns all the time. And after about 3 hours time, we could clearly see the City ahead of us. Funny, because the city was just a mile or two ahead of us, but still an hour away. Optical illusion of course. Just as when you see a ship sticking up in the middle of the jungle. 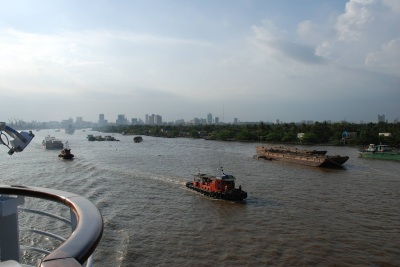 Are we there yet? I can see the city. 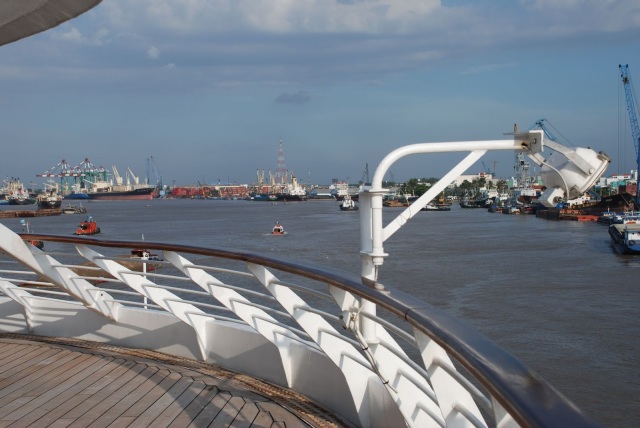 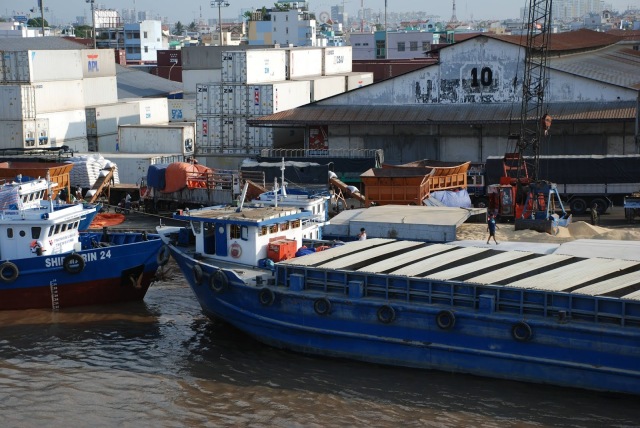 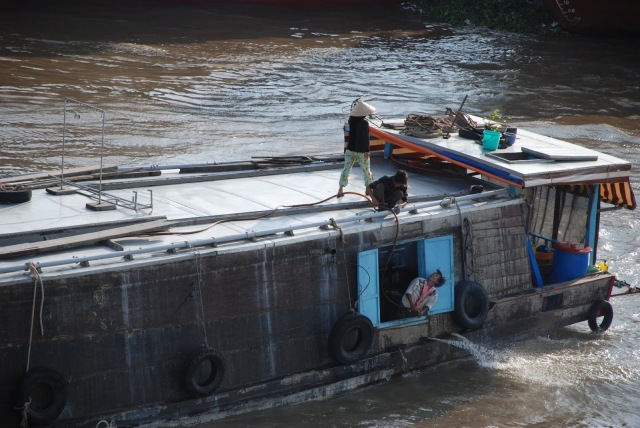 Wonder what they talk about.

And we finally were alongside around 10:30 AM. A long morning for most of us since we had been up at 04:30 (approach), and the day had just started. Nevertheless we all were excited of being here. Tied up in a crappy cargo port, as they dont have a cruise terminal here. 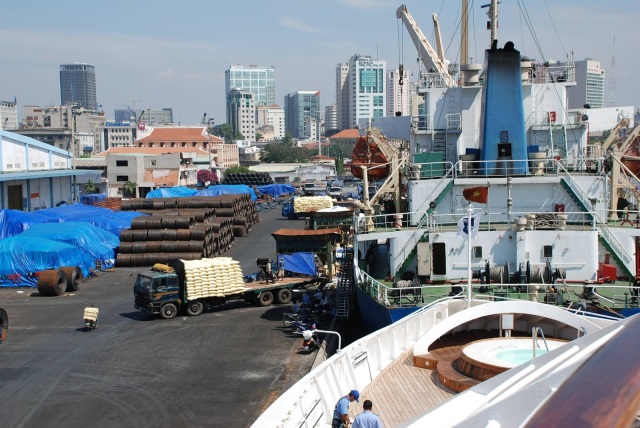 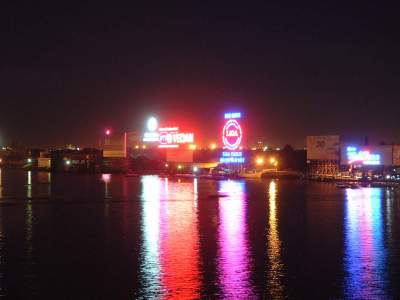 The river at night time.

This is me in Saigon, 18 years later.