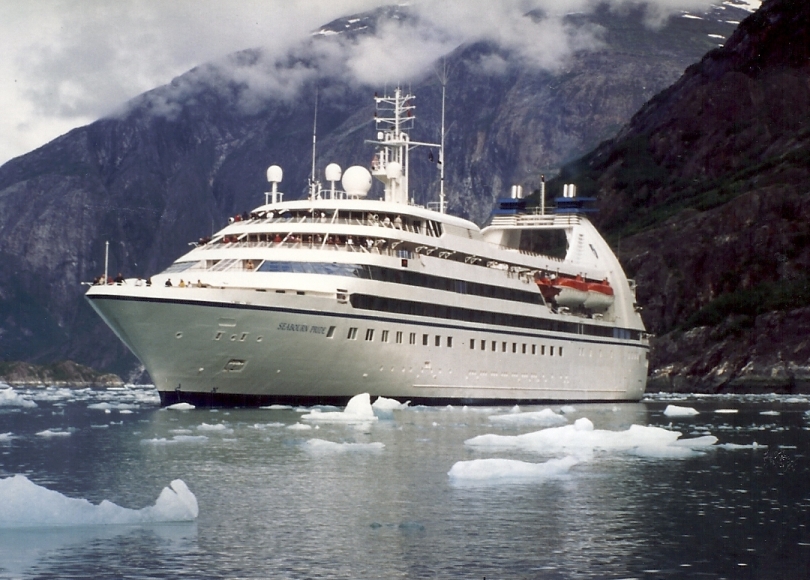 The  picture was shot by Chief Engineer Arvid Joakimsen, and sent to me.
In parts one and two, I talked about the Engine Department and the Deck department. And in this part I will write about the by far biggest department onboard, the Hotel Department. After all, as already mentioned, it is a hotel on keel. With all the different types of jobs one can find in any hotel or resort ashore. 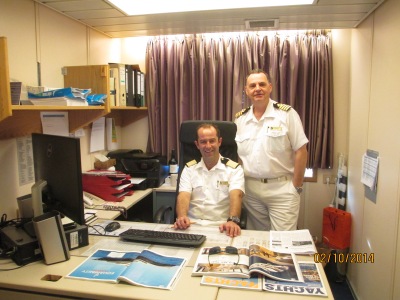 Hotel Department.
The fact this department is the largest and with many familiar positions (jobs) is of course not a surprise to anyone. One does not need to have any experience within cruise ships or the travel industry to figure this out. And as I wrote about regarding the two other main departments onboard, this department is also divided into several Sub departments with their own Managers and Supervisors. And they all report upwards in their system to The Hotel Manager, or in some ships the General Manager.
And once again, just as with the two other departments, the one on top is responsible for the entire department’s performance in regards to the budgets given and the service provided and making sure the passengers are so satisfied that they will return.
Let’s have a look at how this department is split into several smaller departments.

Bar Manager Roland Nema checking the inventory.
The Bar departement headed by Bar Manager is running all the bars onboard, with bartenders, bar waiters and waitresses, utilities hidden behind the bars taking care of the pantries and washing all the equipment and getting stock from the main provision rooms.
Furthermore they also have lots of staff who are involved in taking care of the passengers around the pools and hot tubs out on open decks, by providing towels and arranging sun chairs, bringing cocktails or other beverages, and so on. 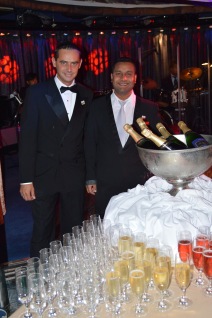 Dressed up for a Formal night, together with Bar Waiter and Bar Waitress.


Then you have the Housekeeping department headed by the Housekeeper, with all the room stewards and stewardesses who take care of all the staterooms, or cabins. All the Hotel utilities who takes care of the corridors and staircases, and other public rooms, polishing brass and stainless steel, emptying garbage bins everywhere, and vacuuming the carpets. And not to forget the people behind the scenes down in the Laundry rooms, where laundry crew, linen keepers and tailors work. 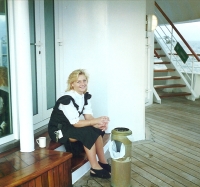 Stewardesses relaxing during time off out on deck.

Anther big sub-department is of course the restaurant crew, headed by the Restaurant Manager, or Maitre D’hotel which he or she is called on some ships. A very big department with Head waiters (Supervisors) who follow up assigned sectors in one of the restaurants onboard, where the regular waiters are working, together with the runners who bring the food from the the galleys (kitchens) to the waiter stations, and bring dirty dishes back to the galleys.

Restaurant staff lined up on the pier.

Bar and Restaurant staff also work on the beach when we are at anchor (in the background).
The Galley Department is another huge department on any cruise ship. Headed by the Chef De Cuisine and his second in charge Sous Chef. With numerous of Chefs and Cooks who deal with meat, soups, sauces, fish, poultry, and what else they might need to make in a modern kitchen (galley).
Several galleys around the ship depending upon how many big and small restaurants, bistros, and other eateries the ship has. Of course there are also a bakery in every cruise ship, with regular Bakers as well as Pastry Chefs, with their helping staff.
The department also has a big number of galley (and waste/garbage room) utilities who helps with washing equipment, decks and bulkheads (and operating the machines), and help out serving in the Crew and Officers Mess rooms.

Assistant Housekeeper Claire Maasdorp and other crew in the Crew mess.

Hamburgers on the menu today?

The Galley department, Restaurants, and Bar department are all supported by another department which is headed by the Food & Beverage Manager, who is one of the ship’s senior officers as well. This depends on the size of the ships, as the smaller ones will have the Provisions master as the head. But on the larger vessels with huge amount of supplies, worth a lot of money, there will normally be a F&B manager in charge.

Part of the huge galley being maintained.

Galley staff having a break, watching a contractor.

Why the galley staff wear HardHats? Because even in Dry Dock they work.

The next sub department within the Hotel Department’s organization is the Entertainment department, headed by the Cruise Director. And here we can find….correct, all kinds of entertainment staff, such as single entertainers as Stand Up, singers playing on a Piano or a guitar, various enrichment lectures, dance teachers, and so on. The ship’s bands (there can be several on same ship) belong to this department, as well as groups of professional dancers. Basically anything which can entertain or activate the passengers in some way.
Not the largest department, but nevertheless a very important department, because the customers (passengers) will want to have entertainment, regardless of where they find themself in the world. And they want it to be as professional as possible. 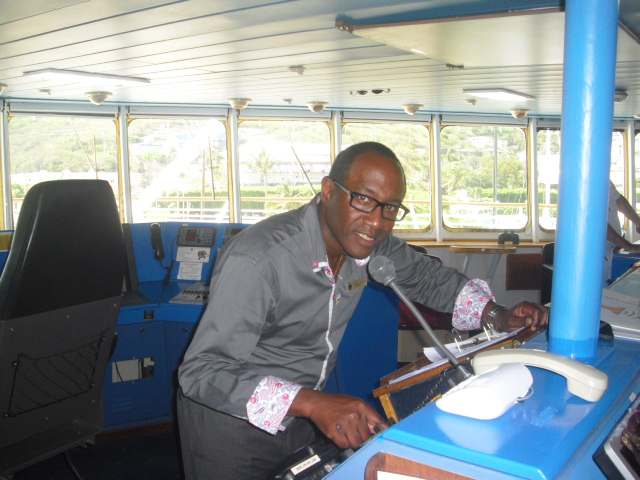 Ready for the evening’s show.


Other sub departments in the Hotel might be the Spa. Which is the Saloon where you can get a haircut, your nails done, a massage if you like. You will also find the gym in this area, because you will find a Gym in all cruise ships these days, equipped with whatever machines you might find in your local gym back home. I always brag about the fact that I go to the Gym every single day, which is true, in order to inspect it. 😆  Silly, yes I know.
And of course, you will also find all the Saunas and steam rooms here. 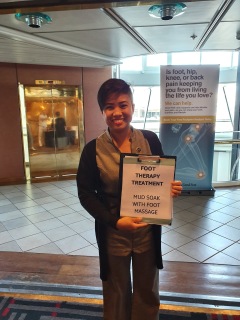 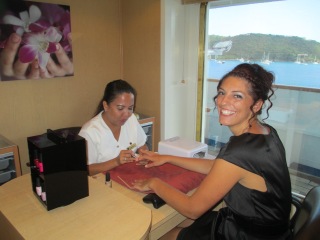 
Other smaller departments include The Travel (or Destinations) department, who arrange all the tours/excursions for the ship’s passengers in the various ports. We have a range of shops onboard selling snacks, all kinds of toiletries, perfumes and colognes, watches, clothing, etc. Tax Free of course. 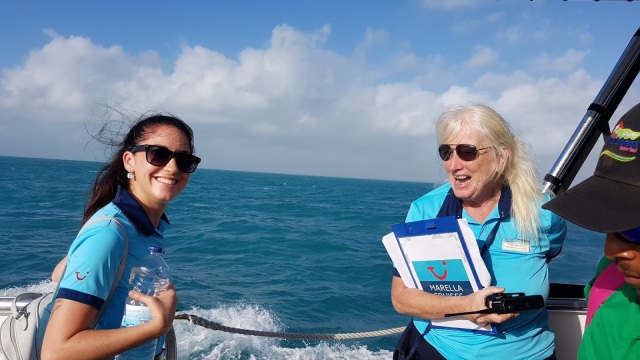 We have of course the Pursers (Chief Purser & Crew Purser). And the Guest Relations department. The name differs from company to company. This is the reception with all their staff, with a special Officer with the title Guest Relations Manager heading them. And I tell you, having observed the staff in the reception upon a turnaround day when 2000 guests leave and another 2000 arrive, it can be a very stressful job. Talk about sometimes being in the trenches. Can you imagine how it is to sit there and take the heat from lots and lots of people who are angry, or frustrated, or just need to report something? It takes some special skills to handle this calmly. Not a job for my personality. I really admire these colleagues of mine.

Receptionists from a Seabourn ship.

The Chief Purser and Crew Purser are two Administrative Officers who will take care of lots of paperwork and also finances. The Chief Purser is in charge of all the ship’s official documentation in regards to being “cleared” each time we arrive a port and new country. The Chief Purser is kind of the ship’s Liaison Officer who will work closely with the various ship’s agents in the ports, as well as dealing with the Officials such as Immigrations officers, customs officers, etc. He/she will also be in charge of the ship’s official cash reserve which is carried around with us, which must sometimes be declared. 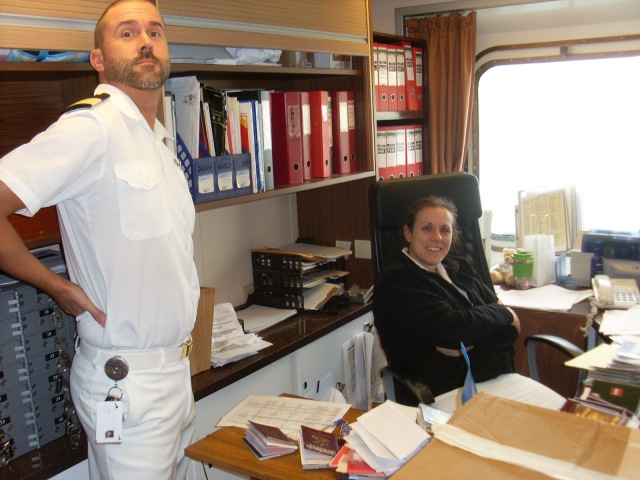 Chief Purser (standing) and Crew Purser, on a Seabourn ship.

The Crew Purser is, as the title suggests, the Purser who has all the Administrative paperwork regarding the Crew. The Crew Purser is the link between the ship and personnel office shoreside (Company). All crewmembers must hand in their passports and various types of certification (proof we can work there), as long as we are on the ship. And this is taken care of by the Crew Purser. The Crew Purser will also provide the on-signing (returning or new hires) crew with various types of information when they arrive the ship and also give a cabin key the to crew. Same again when crew is leaving for any reason (vacation, transfer, quit, etc), the key is collected, and passport, certificates are handed back to the crewmember again. This Purser also takes care of the ship side of travel arrangements for the crew, and hand them their tickets/itineraries when they leave the ship.

In Pursers Office. Looking at this picture, it seems as Doctor Socrates will sign on.

So to sum it up, the amount of jobs you can find on a cruise is the same as shoreside, and with additional ship based jobs as well. I have most likely forgotten about some of the smaller departments or jobs, which I apologize for. No wonder we are like a floating town or small city.

Guess which department onboard these two belong?

The pictures below was from a Blessing of a Marriage (between two crew members) we had on the Bridge in the middle of the Atlantic Ocean. Sarah Louise Parker-Reyes had accepted the marriage proposal from Edgar Salamanca Reyes Jr. I was asked to “give her away” which was a huge honor of course.

Escorting the Bride to be, to the Bridge.