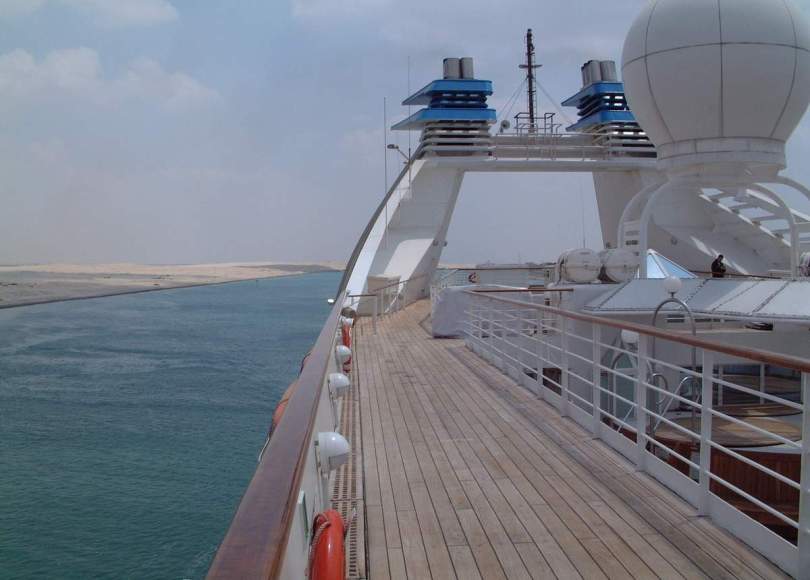 Anyone who has been transiting through the Suez canal, will remember it for some time. And anyone who does it a second time will think, ahhhhh not again. Because this is one of those operations which can be exciting at first, and then very boring after a while. For me, it was exactly like that. So my pictures are from the first time many years ago, because I didn’t bother the second time.

When you arrive the Canal, you are assigned to a waiting area, ot an anchorage. You will hang around with your ship at that position until told you assemble in another area, with plenty ther ships. This so they can send through a bunch of ships at the same time. It makes sense f course.

We have special maritime Pilots onboard during a transit of the Suez Canal. These pilots do very little except being the link between us and the local authorities. Nevertheless an important job, in case we get problems. Because there are still plenty “pockets” around the globe where they don’t speak good English yet. And as we all know, the alternative to sail through the Suez Canal is to sail all the way around Africa, so it saves us several weeks.

As already mentioned, the Suez Canal is by the way not that exciting. Maybe in the beginning when we sail past smaller towns and villages, and I remember I saw a lot of military installations, and lots of burned out equipment from the most recent conflict in the region. But after a short while, there is just sand, sand, and more sand for a long long time. Only interesting we see are the other ships, all kinds of types, passing us the other way, also in a convoy. Because we all must sail in convoys here.

The slide show above shows several smaller towns we passed, and some old war time monuments as well.

As soon as we had entered out into the Suez Gulf, the Pilots left us, and we could continue on our own heading southwards to the Red Sea where our next port was. That port was Safaga (encircled on the attached map below), a small town (prox 40 000 people) with a fairly busy port with plenty of ferries that cross the red sea with mostly pilgrims. But we stopped here for 2 days because several of the Pax had booked so called overland tours (extended tours) to see the Pyramids.

Remember, I will look at this transit from a different point of view, than the passengers on a cruise ship. So if you are planning to take a cruise, which involves the Suez canal and the Pyramids in Egypt, it is worth the experience. Absolutely.

As always, safe sailing, and especially these days.