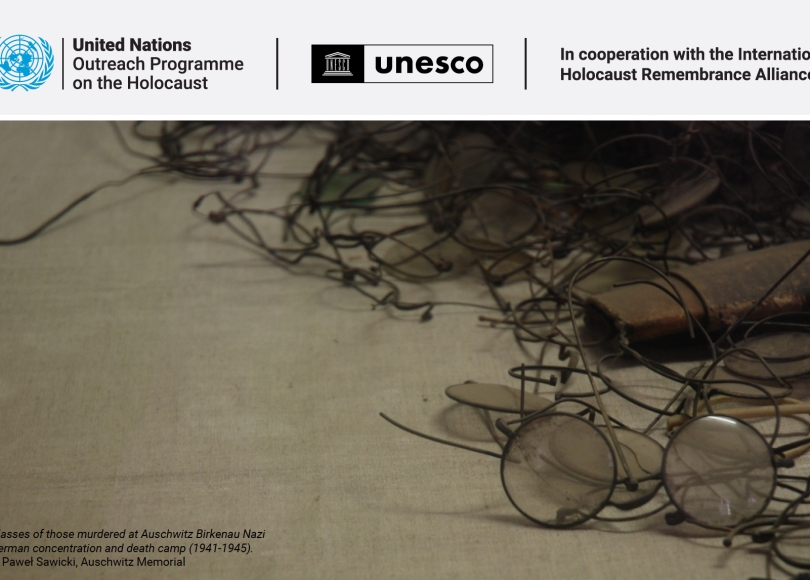 Marking the date of the liberation of the Auschwitz concentration and extermination camp by Soviet forces on 27 January 1945, International Holocaust Remembrance Day calls upon us all to reflect on this history and its enduring legacy. Against the backdrop of the COVID-19 pandemic, this year’s commemoration events face unique challenges. However, in this year of hardship, which has sadly impacted many Holocaust survivors, and with Holocaust distortion on the rise and anti-democratic movements emboldened, commemoration events have become all the more important. That is why, in addition to collecting information on International Holocaust Remembrance Day events – digital or otherwise – taking place around the world, the IHRA partnered with the United Nations and UNESCO to commemorate the victims and survivors.

This marked the first time these international organizations commemorated together, joining forces against Holocaust denial and distortion, antisemitism and the erosion of democratic principles. The Holocaust Memorial Ceremony in memory of the victims of the Holocaust, mandated by the United Nations General Assembly, and organized by the United Nations and UNESCO, in cooperation with the IHRA, was held virtually. Speakers included German Chancellor Angela Merkel, Secretary-General Antonio Guterres, and Director-General Audrey Azoulay. “We must stand with the utmost determination against antisemitism, be it open or veiled, and against denial or diminishing of the Holocaust,” Chancellor Angela Merkel said in her keynote speech. “We are guided by this conviction also during the German Presidency of the International Holocaust Remembrance Alliance.”

The ceremony was followed by a panel discussion on Holocaust denial and distortion, moderated by CNN anchor Hala Gorani and broadcast by CNN, UN Web TV, UNESCO, and on the IHRA Facebook page. “Holocaust denial means truth denial. It means denial of historical facts,” emphasized Auschwitz survivor and Vice-President of the International Auschwitz Committee Marian Turski,  during the discussion. Turski was joined by Robert Williams, the Chair of the Committee on Antisemitism and Holocaust Denial, Kindertransport refugee and author Hella Pick, historian Deborah Lipstadt, and author and international lawyer Philippe Sands.

The panel discussion also featured recorded statements from IHRA Chair Ambassador Michaela Küchler, Alice Wairimu Nderitu, the United Nations Special Adviser for the Prevention of Genocide, and UNESCO’s Special Envoy for Holocaust Education, Serge Klarsfeld. “We’re seeing an alarming rise in Holocaust distortion and antisemitism. The very heart of our democracies is under attack,” IHRA Chair Ambassador Küchler expressed with concern. “There are three key actions we must take: Firstly, we must protect the facts about this greatest crime in history. Secondly, we need to work together internationally to raise awareness of distortion. Therefore, the IHRA recently created recommendations for policy and decision makers that help with recognizing and countering distortion. And finally, we need to build a strong coalition against distortion. We all must protect the facts. Join us in this crucial mission to uphold the truth.”

We all have a responsibility to honor the victims and survivors. For more information on International Holocaust Remembrance Day events around the world, please visit the IHRA’s database of events. However, as Chancellor Merkel concluded in her remarks, “It is not only on anniversaries and remembrance days that our resolve is needed, but every day. We must be constantly vigilant to ensure that we cede no ground to antisemitism and racism.”